What is Evidence Based Practice?

The purpose of this blog is to explain evidence based practice – what it is, what it is not, its history, and how to approach it.

Looking to provide the best care to your patients?

Want to receive the care that is most supported?

Evidence based practice is a growing topic and discussion.

It’s being advocated by a growing amount of people, many are claiming to practice by it, and there are people who think it’s flawed and unnecessary.

While our intent is to discuss what evidence based practice is, we need to discuss what it isn’t as this is without a doubt one of the greatest issues circulating around it.

Many people claim to treat and provide care via evidence based practice, but are likely not accurately and instead just utilizing evidence to their support..

The scientific process is not meant to just affirm what we believe, but to progressively disprove alternatives until we are left with as few working hypotheses as possible.

This video is a fantastic example of the flawed nature that we naturally take in approaching most topics.

All humans function through a format of predictive processing and hierarchical decision making where we take in information, create an expectation, and then make sense of the world. We naturally desire confirmation of our view of the world, what we think is going on, in order to avoid cognitive dissonance. This is why the scientific method is specifically so valuable and a key component of evidence based practice.

Human nature is to go down a path of supporting our own stance, not challenging it. As you can see in the video, there may be many different ways to explain something, but not all are necessarily correct. Through the scientific process, we try to weed out factors and work to continuously update to a more and more accurate understanding.

There are others who think that evidence based practice is a silly term because “everyone practices by evidence.”

These critics are easy to challenge as it’s the differentiation in the individual words and what the term is meant to mean as a whole.

Often times these people will say it’s just a matter of what evidence you value, and that is absolutely true and a central tenet of the term. Much like the first point on the scientific method being aimed to disprove – not to prove – evidence based practice is an approach that is meant to be conducted in a certain format.

For the people who think we all practice evidence based practice, they are gravely mistaken and have a poor understanding of the terminology, what it’s meant to be, and why it’s so valuable.

The History of Evidence Based Practice

Our earliest comprehension of the terminology could go back to ancient times, but that isn’t very relevant to our current model. Instead, we can see that glimpses of what would become the current model started with a very important person – Archie Cochrane.

To discuss evidence based practice without mentioning him would be a disservice. Archibald Cochrane was a doctor and professor who had a desire to see medicine improve. He wanted to see a change from post hoc fallacy practice and that of tradition, to something that was more justified, valid, and reliable.

Cochrane advocated for improving the quality and level of research that was being conducted. His initial book was published in 1972 and was a call to action for the field of medicine. He was a large advocate of randomized controlled trials and cohort studies, bringing these to a greater recognition. Eventually he would form the Cochrane group, which is known for their extremely high quality and rigorous reviews.

Guyatt et al. wrote a seminal paper where the introduction of Evidence-based medicine was made and termed back in 1992. In the paper, the authors detail how our prior model without research was flawed and heavily limited, that was insufficient for best care, and that evidence based medicine will require new skills to be learnt.

This paper was a critical step in the process of evidence based practice and we want to highlight a few statements from it.

The rationales for diagnosis and treatment, which follow from basic pathophysiologic principles, may in fact be incorrect, leading to inaccurate predictions about the performance of diagnostic tests and the efficacy of treatments.

This is a critical one that we have seen emerge in the rehabilitation world. As you can see in our videos on …… and blogs on ….. this is something we are still working to update with.

In future blogs and videos we will continue to share information about literature, how to appraise it, what we can do with it, and how to practice based on current literature available.

People like quick and easy answers. Cookbook medicine has its appeal. Critical appraisal involves additional time and effort and may be perceived as inefficient and distracting from the real goal (to provide optimal care for patients).

There are those out there who challenge against evidence based practice saying that it’s just cookbook medicine or non-personalized care. This is highly contrasting to proper evidence based care where we have to consider a breadth of literature to each person and their unique situation. Providing the best care possible can be more challenging – particularly on time – and that’s something we will continue to share on how to do so effectively and efficiently.

While Guyatt’s article is the first to reference the term, the paper that is likely most regarded as THE PAPER on evidence based practice comes from Sackett et al. 1996 – Evidence based medicine: what it is and what it isn’t.

This paper is commonly referenced as the origin and starter to evidence based practice. In this paper Sackett et al. breaks down the topic and explores common beliefs around it.

When most people discuss this paper – and evidence based practice in general through it – there is a common theme brought up: the three components of EBP.

Sackett describes different components of evidence based medicine and it emerges as best available evidence, clinical expertise, and patient preferences.

Sackett routinely references the process of considering best available evidence, then applying it to the individual patient through the clinician’s expertise, and then considering the preference of the patient.

Instead of a stool, we should think of it more like a funnel. Erik Meira coined this idea and flows beautifully.

We start off considering the evidence in totality – research, experience, basic sciences, etc.- then appreciate the scientific method of disproving factors, to then lead to clinician expertise and finally consider the patient’s preference from what is remaining.

This approach is the most reflective of what evidence based medicine is meant to be. This helps to factor in research, comprehensive evidence, experience, and preferences of the patient in a systematic and thoughtful manner.

Evidence based practice isn’t a set thing, it is constantly updating and changing – that is why it is so valuable and different than standard practice and tradition.

There is new research constantly emerging, some of which is of high value and could change practice, some of which has little to no value and should not change practice. It can be very daunting to be able to provide true evidence based practice and Sackett brings up an important point on this in reference to studies showing that very busy clinicians in different settings can incorporate EBP.

Such studies show that busy clinicians who devote their scarce reading time to selective, efficient, patient driven searching, appraisal, and incorporation of the best available evidence can practice evidence based medicine.

If you want to learn more, I highly recommend checking out our podcast episode with Professor Steve Kamper:

Want to learn more? Check out our some of our other blogs:

Thanks for reading. Please leave any questions or comments below. 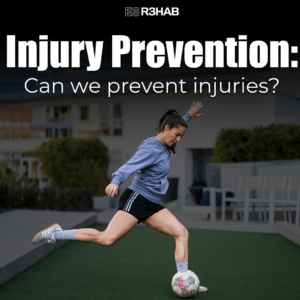 Injury Prevention: Can We Prevent Injuries?