The purpose of this blog is to discuss a condition that goes by many names: hip bursitis, trochanteric bursitis, greater trochanteric pain syndrome, gluteal tendinopathy, and the list goes on. I’m going to outline which of these diagnoses is most accurate based on the research, and then use that information to show you activity modifications and exercise progressions that you can do to help manage your symptoms.

Looking to improve the strength, range of motion, and control of your hips to enhance your function and performance?  Check out our Hip Resilience program!

Let’s start by describing the anatomy of this region. On the outside aspect of your hip, you have a bony prominence known as the greater trochanter. It is part of the femur, or thigh bone, and serves as an attachment site for various muscles including the gluteus medius and minimus. These two muscles primarily act to abduct your hip in a non-weight bearing position, or, more importantly, stabilize the pelvis in a weight bearing position. Superficial to these tissues, or closer to the skin, lies the Iliotibial Band that runs from the pelvis all the way down to the knee. The tensor fascia latae attaches to it from the front, and part of the gluteus maximus attaches to it from the back. Finally, you have several bursae here which are small fluid filled sacs that help to cushion and reduce friction in the area.

Understanding the anatomy is an integral component of defining the diagnosis and outlining the appropriate framework for rehabilitation because many individuals associate symptoms here with the word “bursitis” based on what they’ve heard or read. The suffix “itis” implies inflammation of a bursa, the subgluteus maximus bursa to be exact, which then often dictates treatment – rest, ice, and anti inflammatories.

However, hip bursitis or trochanteric bursitis, are not the most appropriate terms to describe this lateral hip pain.

So what do we do with all of this information? Well, it’s not to say that inflammation is never present or never a possible contributing factor, but it definitely doesn’t seem to be the primary driver of symptoms. Therefore, we probably shouldn’t be using the term hip bursitis. The reason that this is so important is that it can help shift your mindset and guide treatment.

For example, as I alluded to earlier, if you assume that your symptoms are due to inflammation, you might take a very passive approach – rest, ice, and medication. It almost puts you in the backseat.

But, if you treat it more like a tendinopathy, managing load to the area as needed, then you’re in control. You’re in the driver’s seat and you can start taking the appropriate steps to helping yourself.

The last thing to note before moving on to the next two sections is that there are many other reasons that individuals might have symptoms in this region that are beyond the scope of this blog. However, Grimaldi et al. 2016 and Ganderton et al. 2017 found that pain with standing on one leg for 30 seconds or resisted hip abduction can help rule in this condition, and no pain with palpation of the greater trochanter can help rule out the condition.

Activity modifications are a key component of rehabilitation for this lateral hip pain as outlined by Grimaldi and Fearon in 2015, and Grimaldi et al. in 2015. These recommendations are based on trying to reduce compression of the gluteal tendons at their attachment site on the greater trochanter – either directly such as by lying on that side or via the overlying IT Band when the hip is in adduction as demonstrated by Birnbaum and colleagues in 2004.

Let’s rattle off some possible activities to modify, but also understand that if they don’t cause you any issues, don’t worry about them.

Those are all considerations for ways to potentially reduce the amount of load experienced by the gluteal tendons, but we also want to build up their capacity so that they can handle more load. That’s where the exercise progressions come into play.

With regards to changes in function, Allison and colleagues dominate the research here. Individuals with gluteal tendinopathy demonstrate weakness of their hip abductors bilaterally and alterations in muscle activity and mechanics during gait so the focus of rehabilitation will be two-fold: strengthen the hip abductors and eventually progress to single leg, weight bearing exercises.

Honestly, it doesn’t actually matter how you accomplish these tasks as long as the exercises are appropriately challenging and tolerable, you’re objectively making progress on a week-to-week or month-to-month basis, and you’re giving yourself at least 3 months of a dedicated regimen. Otherwise, don’t get too caught up in the minutia.

Isometrics are one possible starting point (not a rite of passage). I’m going to show you three different tiers of exercises (easy, medium, and hard) and you really only need to pick 1 or 2 exercises based on your symptoms and strength, and then you can regress or progress as needed. 3 to 5 sets of 10-60 seconds at the highest comfortable intensity, daily or every other day is a good starting point.

Isotonics are another possible starting point and I’m a big fan of sidesteps:

You can vary the width of your step and resistance of the band to accommodate your needs. You can also see how this could be progressed from the standing isometric. And as I mentioned, you want to eventually perform some type of single leg exercises. You can start with squats, deadlifts, and bridges and then progress to their single leg variants. Or, you can start with single leg balance and work your way to step ups, step downs, reaches, standing fire hydrants, etc.

Thank you so much for reading! Please leave your questions in the comments below!

Looking to improve the strength, range of motion, and control of your hips to enhance your function and performance?  Check out our Hip Resilience program! 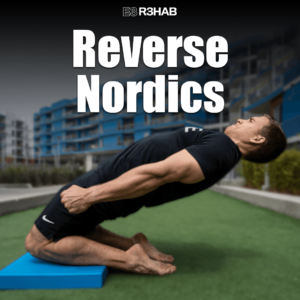 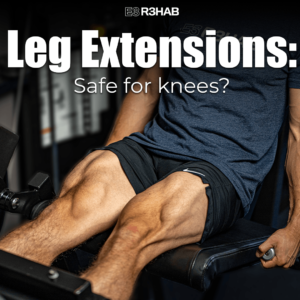 Are Leg Extensions Bad For Your Knees?
Menu