The purpose of this blog is to discuss Patellofemoral Pain, dispel myths related to crepitus, chondromalacia, and patellar maltracking, and provide a comprehensive framework for rehab, including exercise progressions with sets and reps.

It’s usually non-traumatic in nature with diffuse pain gradually presenting behind or around the patella with squatting, jumping, running, or going up and down stairs. Symptoms may also present with kneeling or prolonged periods of sitting, which has been dubbed the “movie theater” sign.

A common concern is crepitus, which refers to a variety of sounds and descriptions – grinding, cracking, popping, etc. Many people associate it with “bone-on-bone,” “wear-and-tear,” and long-term joint damage.

While the noise may be unpleasant or undesirable, it appears to be quite common and is NOT an indication that exercise is dangerous or harmful.

However, a paper by van der Heijden et al in 2016 found “no difference in composition of the patellofemoral cartilage.. between patients with patellofemoral pain and healthy control subjects.” In fact, a 2016 consensus statement by Crossley et al suggested that we shouldn’t even use that terminology.

Patellar malalignment or maltracking was once thought to play a significant role in the development and persistence of patellofemoral pain. In order to treat this, it was believed that things pulling laterally on the patella, like a “tight iliotibial band”, had to be released while the things pulling medially, like the vastus medialis obliquus (VMO), needed strengthening and neuromuscular re-education. This theory has NOT panned out.

Papers by Fairclough, Falvey, and Chaudhry also suggest that permanent deformation or elongation of the IT band from stretching, foam rolling, or massage is highly unlikely.

With regards to the VMO, a systematic review by Smith et al in 2009 recommended that “clinicians not focus on VMO strengthening.” Atrophy of the quadriceps in individuals with patellofemoral pain isn’t unique to the VMO, and trying to do specific VMO retraining versus general quadriceps strengthening doesn’t make a difference in the long run.

Plus, most of the exercises in physical therapy aimed at targeting the VMO are extremely low level and focus on trying to change a nonsignificant .01 second difference in firing patterns.

And while taping may contribute to a reduction in symptoms, Ho et al in 2017 found that it has nothing to do with changing the alignment of the patella.

Perhaps most importantly in this section, Carlson et al in 2017 found that females with patellofemoral pain showed an improvement in symptoms without any change in how their patella is tracking.

Before discussing exercise options for patellofemoral pain, it’s important to understand the rationale behind their selection based on some key rehab principles.

You might hear that certain exercises are “bad” for your knees because they cause too much stress, so I want to start by emphasizing that stress isn’t bad. It’s not necessarily good either. Stress is just stress. It’s not a dichotomy, but a continuum that requires context.

If you want to stimulate hypertrophy, stress your muscles. If you don’t stress them enough, you might atrophy. If you stress them too much, you might get rhabdomyolysis.

If you want to improve your bone density, stress your bones. If you don’t stress them enough, that might contribute to osteoporosis. If you stress them too much, you might get a stress fracture.

There’s plenty of examples, but you get the point.

Similarly, there are no good or bad exercises for your knees. There are exercises that merely create more or less stress at the patellofemoral joint, which may or may not be appropriate for you in a given scenario.

For weight bearing exercises, there are generally three things that increase the stress at the patellofemoral joint: more knee flexion, higher loads, and a greater distance between your knee and the center of mass behind it.

I’ll keep the load constant by using a bodyweight example to demonstrate what I mean.

And that’s what I’m trying to get across here. Whether you’re having difficulty with going down the stairs or squatting to the toilet, you have to find the starting point that’s appropriate for you. We’re trying to slowly move you toward the right side of the continuum, only as far as you need to go for your goals.

The accumulation of stress is also a consideration. Stress is not just about a single movement or exercise, but the total volume and frequency of an activity. I can run a mile (which is more than enough for my needs), but that doesn’t mean I can do an ultra marathon. I’m not adequately prepared for it.

If we use a similar continuum, walking 5 minutes might be all the way on the left while running an ultra marathon is all the way on the right. You can then fill in the middle however you want by altering the distance or duration of walking and running, as well as the frequency throughout the week.

If your goal is to play basketball for an hour or run a 5k, but you can’t because your knees hurt, that doesn’t mean either activity is bad or out of reach. Instead, you might have to move left along that continuum until you find a tolerable starting point. For some people, that might mean walking 30 minutes per day for a month before slowly adding in some short runs.

There’s not a single path that everyone has to follow because we all have different starting points and goals.

With regards to exercise prescription, it’s usually recommended to incorporate at least some form of hip and knee strengthening. You can certainly do more or less than what I’m going to suggest, but completing 3 exercises, 2 times per week, is manageable for most people.

Level 1 – Bodyweight Squat. Gently tap your butt to a chair and stand back up. If it’s too challenging or painful, shorten the range of motion or use your hands for assistance. Aim for 3 sets of 20 repetitions.

Level 2 – Split Squat. Start in a stride stance and lower yourself down so that your back knee taps an egg that you don’t want to crack. If it’s too difficult for your front or back leg, shorten the range of motion or use your hands for assistance. Aim for 3 sets of 15 reps.

Level 3 – Front Foot Elevated Split Squat. Elevate the front leg using a 2-4” object to start. Drive your knee as far forward as tolerable. Aim for 3-4 sets of 8-15 slow and controlled reps. Over time, you can progress the height of the step or add weight as needed.

Level 1 – Step Up. Use a stair or objects stacked 6-7 inches high. Don’t push off with the back leg. Focus on putting all of your weight through the working leg and just gently tap up and down with your other heel. If it’s too difficult, decrease the height or use your hands for assistance. Aim for 3 sets of 20 reps per leg.

Level 2 – Lateral Step Down. Same exact cues except this movement will allow for a little more knee travel. Aim for 3 sets of 20 reps per leg.

Level 3 – Forward Step Down or Elevated Lateral Step Down. You can either step forward off the step or continue to perform the lateral step down while gradually increasing the height of the step. Aim for 3-4 sets of 8-15 slow and controlled reps per leg.

Level 1 – Double Leg Eccentric Slider. Bridge up, keep your glutes squeezed, slowly slide your legs out, drop down, bring your feet back to the starting position, and repeat. If you can work up to 3 sets of 12 reps, progress to the next level.

Stand on one leg while keeping a slight bend in both knees, hinge at your hips until your trunk is almost parallel with the ground, and then return to the starting position. Repeat this movement without touching your foot to the ground. If this is too challenging, use your hands to help with balance, shorten the range of motion, or tap your foot to the ground. Aim for 3-4 sets of 6-12 reps. Add weight as needed.

Level 1 – Short Side Plank. Start on your forearm and knees while keeping your trunk in a straight line. Hold this position. Aim for 3 sets of 60 seconds.

Level 2 – Side Plank. Straighten your legs, stack your feet, and keep yourself in a straight line. Aim for 3 sets of 60 seconds.

Level 3 – Side Plank Hip Abduction. Position yourself in the same way as the previous exercise, but slowly move that top leg up and down with good control. Aim for 3-4 sets of 45-60 seconds.

Level 1 – Double Limb Bridge. Lie on your back, bridge up, squeeze your glutes, lower yourself down, and repeat. Aim for 3 sets of 20 reps.

Hopefully if you read the blog all the way through, you’ll understand that the exercises that I presented aren’t inherently special,  but they progressively challenge the hip and knee through a variety of movements, including ones that stress the patellofemoral joint more over time.

I also want to mention that I primarily discussed physical stress, but pain is multifactorial, and other forms of stress, lack of sleep, medications, comorbidities, etc. may play a role in what you’re experiencing. 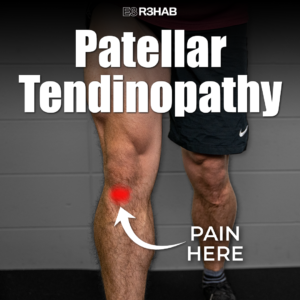